The app economy will grow to be worth double in 2020

Market researcher App Annie, who analyzes the applications industry, released a report that estimates the size of this market. According to App Annie, in 2016, apps have generated revenues of $51 billion. Furthermore, it suggests that the app economy will almost double by 2020, reaching $101 billion dollars.

State of the global app market

Global growth will be driven by two factors: increased use of apps in developing markets and improved revenue from paid apps in mature markets. Mexico, Argentina, India and Indonesia have an enormous opportunity as fast-growing markets. Despite economic recessions, the app industry has continued to grow. For example, countries like Argentina and Brazil had very strong growth in the app market in 2015. App revenue in Brazil has grown 40 percent in 2016. Mature markets will continue to grow as China has surpassed the US in terms of total application store revenue in the first half of 2016. Although users in United States have reduced the total number of app downloads, they spend more on the services they use, which will result in revenue growth for developers and stores.

Visit King of App to create your first business app. You don’t need to program.

Global revenue generated from the App Store and Google Play, the two largest mobile app stores with global operations, rise 40 percent in 2016 from $25 to $35 billion. The Apple store accounted for almost 70 percent of the total. If Android independent stores and mobile advertising revenue are included, worldwide app revenue was 89 billion dollars last year. It’s worth nothing that these numbers do not include physical merchandise sales from retailer apps or online-to-offline services such as Uber, as their payment process does not use billing systems from app stores. App Annie estimates that 284 billion mobile app will be downloaded by 2020. The smartphone user base should more than double by then. The Apple Store is expected to remain the largest revenue-generating retailer of its kind in 2017. From then on, the Google Play Store is likely to surpass it thanks to the popularity of the Android system in developing countries. Most of the revenue, as usual, comes from games. This category accounted for 75% of the revenue on the App Store and 90% on Google Play. In the App Store, the role-playing games (RPG) subcategory alone accounted for half of the revenue growth in 2016.

The rate of downloads

There was annual increase of downloads of 15%, rising from 77 to 90 billion worldwide, taking the App Store and Google Play into account. That number was pushed by emerging countries, where new smartphone users tend to download more apps, especially those considered essential, such as social networks and messengers. Mature markets, such as the US, Japan and Germany, are slowing in downloads, but accelerating in revenue and engagement. Globally, total time spent in apps grew by 63 percent on Android phones from 2014 to 2015. App usage will get a boost on newer platforms such as wearables, TVs, virtual and augmented reality (VR and AR) platforms, home Internet of Things (IoT) interfaces, and cars. Engagement with apps can be measured by the amount of time people spend interacting with apps. According to the App Annie infographic, the total time spent on apps on Android smartphones worldwide (not counting China) increased 25 percent in 2016 from 720 to 900 billion minutes. The top country was India, which accounted for almost 150 billion minutes, followed by Brazil, with about 110 billion minutes.

Video games will remain at the top of the major revenue generators in the app industry. Non-gaming app revenue will account for 25% of all app store expenditure. The consultancy also estimates that  101 billion dollars are direct sales and subscriptions. By 2020, video games will hold 55 percent of total app industry revenue, $53.08 billion in store sales revenue and $51.4 billion in advertising revenue. The other apps, will account for the rest (45%), $65.8 billion from advertising and $18.8 billion from store sales. It should be noted that the participation of the games is falling gradually. In 2015, they accounted for 66% of the total as the App Annie infographic mentions. For non-gaming apps, social and video networking categories are what drive growth. 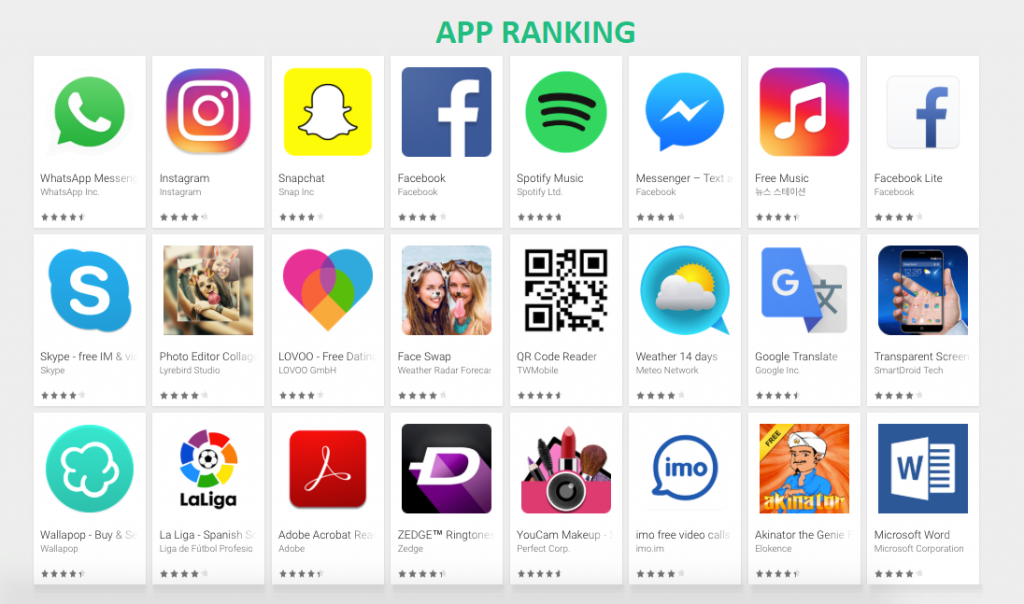 The most downloaded apps

The most downloaded games

The apps (excluding games) that generated the most revenue

The games that generated the most revenue

If you have a specific idea for an app in mind that hasn´t been launched on the market, we can turn your dreams into apps! King of App offers a unique open source platform that allows you to develop your very own customizable application without the need for technical knowledge.